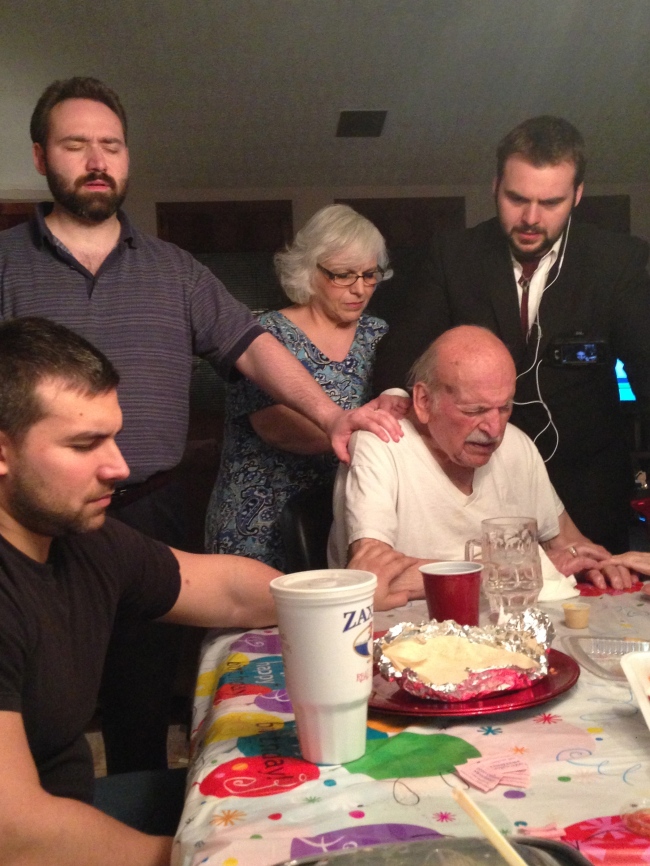 For the past week before we had told anyone about my dad’s transition to heaven, when people asked how he was my one answer was “It is well” and that was the truth. I really figured that anyone who really new me and had read my devotions for any length of time would simply figure it out. Yes things can be rough all around you, there can be hell in the hall, but I know a door will open where the answer to everything we need will be found. I go back to the story in the Old Testament of a woman who had lost her dear son, she was on her way to the Prophet to tell him, to have him come and pray for the boy. She laid her son on a bed and closed the door. She left without telling her husband, who was out working in the fields, that the boy had died. The Prophet saw her coming and sent his servant out to inquire of her and find out what was wrong before she even reached his house. The servant went and asked her what was wrong, her answer is the title to a song that I dearly love and was singing to myself today without even realizing what I was singing, then it dawned on me that I was singing, It Is Well With My Soul.  With her son lying dead, her answer to the servant was, IT IS WELL, Oh to have the faith to say that in our own times of sickness, grief and trouble. I looked up the words to the song so I could put them here for you to read and enjoy and there I saw the story of how the song was written.  It broke my heart. I am going to put it here for you. Please read it and ask yourself if anything you have ever gone through compare with the story behind this song. In 1871, tragedy struck Chicago as fire ravaged the city. When it was all over, 300 people were dead and 100,000 were homeless. Horatio Gates Spafford was one of those who tried to help the people of the city get back on their feet. A lawyer who had invested much of his money into the downtown Chicago real estate, he’d lost a great deal to the fire. And his one son (he had four daughters) had died about the same time. Still, for two years Spafford–who was a friend of evangelist Dwight Moody–assisted the homeless, impoverished, and grief-stricken ruined by the fire. After about two years of such work, Spafford and his family decided to take a vacation. They were to go to England to join Moody and Ira Sankey on one of their evangelistic crusades, then travel in Europe. Horatio Spafford was delayed by some business, but sent his family on ahead. He would catch up to them on the other side of the Atlantic. Their ship, the Ville de Havre, never made it. Off Newfoundland, it collided with an English sailing ship, the Loch Earn, and sank within 20 minutes. Though Horatio’s wife, Anna, was able to cling to a piece of floating wreckage (one of only 47 survivors among hundreds), their four daughters–Maggie, Tanetta, Annie, and Bessie–were killed. Horatio received a horrible telegram from his wife, only two words long: “saved alone.” Spafford boarded the next available ship to be near his grieving wife, and the two finally met up with Dwight Moody. “It is well,” Spafford told him quietly. “The will of God be done.”
Though reports vary as to when he did so, Spafford was led during those days of surely overwhelming grief to pen the words to one of the most beautiful hymns we know, beloved by Christians lowly and great. Though not yet (to my knowledge) in Catholic hymnals, it has long been a favorite of Baptists (and other evangelicals) including Martin Luther King. Who can say what it is about life that leads us to such a peace … like a river. Who can say what ingredients it takes, for this person or that, that transforms such overwhelming sadness into personal peace, or brings healing, or … leads our souls to a new depth, or compassion. Langston spoke of his people, whose souls had grown …. deep …. like a river. Perhaps the answers lie in the heart. And for each one, whatever the answer is, it comes in a kind of poignant solitude unapproachable in any other way. I ask this, though I just don’t know for sure. Say, It is well, peace!

3 Replies to “Going through hell? You can still say It Is Well!”