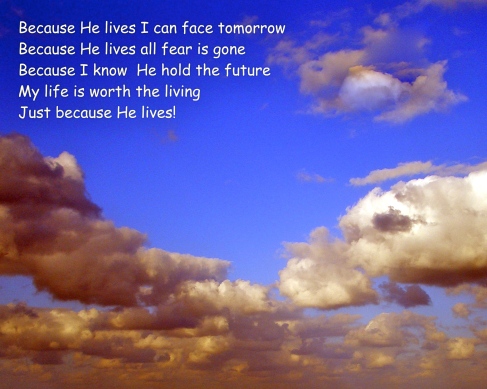 There is a song from a Broadway musical, “Sweeney Todd” recorded by Barbra Streisand, that I thought of tonight as I addressed a friend. Before I give you the lyrics or why I thought of it I want to talk a minute. There is so much trouble in the news, not just the world news but in our local area. Today a man was shot in the head, first report said at a Subway, a hit and run accident resulting in death and I found that a man that had been shot in a home invasion back in May was the brother of a Pastor friend, Wiley Jackson. This man has been in my church and has worshipped with us, he was shot to death by two guys trying to rob his family’s home! Everyone wants to get ahead and anymore the way up is more by stepping on the head of another person rather than honestly working their way to the top. Gossip magazines sell out quicker than anything else because everyone wants to hear the dirt on their favorite movie star or religious leader. I understand the “need” the “urge” to want to strike back at someone who hurts you, been there had it done to me, but the way I was raised I was never allowed to speak up for myself especially if it was someone in the church so I pushed it all down until as an adult sometimes I want to burst forth with all the energy in me to correct a wrong done, not especially to me but to someone I feel is defenseless. All that pent up, let’s call it, “urge” in me causes my insides to boil. There was one time I let it out, I was a freshman in high school and had taken abuse from a classmate the last time I ever intended to. We were in gym class and were tipping off the basketball. She had several inches of height on me so when my hand when up for the ball I “accidentally” hit her in the nose, as you might have imagined she struck out at me and when she did I simply grabbed her arms and held them (thank God I am strong) until the Coach got there to stop her unsatisfied attempts at returning the favor, after all it was an accident, wasn’t it? Unfortunately my dad was in the school teaching a Bible class at the time and he was called to the gym. He took me home, I told him the truth, and he never mentioned it again. With a dad like that you have to know that God forgives us daily. Hebrews 13:5-6 “Don’t be obsessed with getting more material things. Be relaxed with what you have. Since God assured us, “I’ll never let you down, never walk off and leave you,” we can boldly quote, God is there, ready to help; I’m fearless no matter what. Who or what can get to me?” So I have confessed my fault to you my friend according to James 5:16 “Make this your common practice: Confess your sins to each other and pray for each other so that you can live together whole and healed. The prayer of a person living right with God is something powerful to be reckoned with.” I don’t have to be afraid; God is always there to grab the arms of the enemy and save me, even if I don’t deserve it! Isaiah 41:10  ‘You’re my servant, serving on my side. I’ve picked you. I haven’t dropped you.’ Don’t panic. I’m with you. There’s no need to fear for I’m your God. I’ll give you strength. I’ll help you. I’ll hold you steady, keep a firm grip on you.” Now to the lyrics, I think I can hear Jesus saying them to me: “Nothing’s gonna harm you, not while I’m around. No one’s gonna hurt you, no one’s gonna dare. Others can desert you not to worry, whistle I’ll be there.” That is the way I feel about you and that makes me like my heavenly Dad doesn’t it? Tell you what, let’s hold hands and face all the bad news together. There’s one thing I do know “Because He lives, I can face tomorrow, Because He lives, all fear is gone. Because I know who holds the future, my life is worth the living just because He lives!”

2 Replies to “No One’s Gonna Dare”