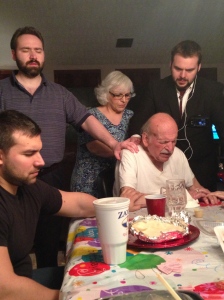 I saw something on GMA that caught my attention, it was a seven-year-old boy in a wheel chair, he was wearing a special shirt, with John Cena’s picture on it. Mr. Cena is a wrestler with the WWE and I know that because my thirteen-year old grandson is into the wrestling experience at the present time. The wrestler was there and he gave this young boy tickets to a match, a shirt, put the Championship belt around his waist and knelt down to have his picture made with little Johnny Littman, who seemed too overwhelmed to react. I had a tear in my eye as Mr. Cena told the audience that fulfilling this wish made number 300 that he had been asked to fulfill. The audience reacted in wild applause. I started to walk away from the TV and then just sat down to think.

I was very happy that this young boy was getting to see one of his idols right there in front of him. I remembered seeing young Mattie Stepanek meet his idol, former President, Jimmy Carter. This young boy was a poet and his works have been published, he has since passed away. I believe Mattie went to heaven where he met Jesus and the Father face to face, a lot more impressive than Mr. Carter, if I do have to say so, but they chose to bring this former President to him, because he was dying.

I know how it feels, I have begun to feed my mother ice cream for supper when she won’t eat anything else, because she is older and I want her to be happy. My dad would ask for the strangest things, and I always complied, like having a tuna sandwich on raisin bread, yes you read that right, why? Because he was 95 and I was feeling his imminent death and I wanted him to be happy. So this is my quandary, why do we go to such lengths to give someone who is close to death and will see the Lord and the heavenlies soon, something that is totally temporal? Will Johnny or Mattie have had a better life for seeing John Cena or President Carter? Or another child die happy because they got a trip to Disney Land?

If either of those children had not been close to death no one would have noticed them, they could have wished all they wanted to meet one of those famous people and it wouldn’t have happened! Don’t misunderstand me here, I think it’s wonderful, but, if I could have a wish from the wish foundation, the little boy that is hiding in a closet while his mother gets high on heroin, would be rescued. The little girl going to school embarrassed because her clothes are so shabby and no money for lunch could be clothed and fed. My heart breaks for old people in convalescence homes forgotten and left to die with no one around to fulfill a final wish for them. I visited one of those this past week, one of the beds in the room was empty because the occupant had been taken to the hospital, near death. When I saw what that poor woman had been laying on, the pitiful excuse for a mattress, I wanted to cry. It was a thin black, plastic covered pad, not a mattress of any description and I was appalled.

Matthew 25:36-40 I was hungry and you fed me, I was thirsty and you gave me a drink, I was homeless and you gave me a room, I was shivering and you gave me clothes, I was sick and you stopped to visit, I was in prison and you came to me.’ “Then those ‘sheep’ are going to say, ‘Master, what are you talking about? When did we ever see you hungry and feed you, thirsty and give you a drink? And when did we ever see you sick or in prison and come to you?’ Then the King will say, ‘I’m telling the solemn truth: Whenever you did one of these things to someone overlooked or ignored, that was me—you did it to me.’

There is nothing any of us can do alone for the masses, but first and foremost remember this, charity begins at home. Are you neglecting the child that reminds you too much of your ex? Ignoring the needs of your old folk? Look in the mirror at yourself do you love you? Jesus does.