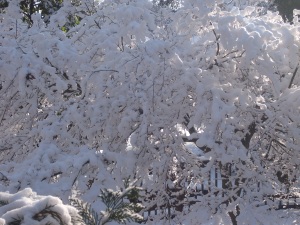 What is worse than being iced, inside of your house? Being iced inside of your house with no Wi-Fi, which not only keeps you off the computer but also stops your phone calls! Thankfully my daughter had changed carriers lately and had something called a “hot spot” and we were able to connect to the outside world!  She told me, when I said I had no cable/phone/internet connection, that she had a “hot spot” I looked at her in disbelief that she would admit such a thing at this particular moment in time to me her innocent and unsuspecting mother! When I was young a statement like that was called something a little different and for a while all the women on talk shows wanted to know where theirs was located!

When she explained that since they were no longer on AT&T but on T-Mobile, victims of advertising, they had this new fangled thing that meant they paid for this particular hot spot thing and could use their internet in the car and she operated my Apple TV with it!  I know we all need to be informed of all the conditions on the road but come on folks, 24-hour coverage with various reporters in the freezing elements saying essentially the same thing? Enough is enough and enough is too much for me. I would have been happy with a report scrolling along the bottom of the screen or even updates so I was looking for alternatives, and before I quit this little rant I have to say that Al Roker got it right! We were warned, I knew it and told the family we needed to be off the road by 11AM but instead of listening to me they listened to the local weather forecasts which said all the mess would be below I-20 which would keep it out of Metro Atlanta area. No need to beat a dead horse I already told you about our woes last in yesterday’s blog.

Now, do you know me well enough to know what is coming next? Of course you do!! The thought of a “hot spot” gave me pause and it hit me that I pay a large amount for my cable which includes my telephone service and internet and yet in a time when I needed it the most it was unavailable to me but because I was in the same room with my daughter I was able to resume perusing the internet and of course finding out what all my friends on Face Book were up to!

I know that athletes talk about being “in the zone” when they work out, run, or as I heard one basketball player talking about his record-setting game. Is there a place for you that is a hot spot or in the zone when it comes to your spiritual life, prayer or scripture study? I have found that there are times when I can say the simplest prayer and suddenly it feels like electricity ran up my spine but then there are other times when I try to channel my best Kathryn Kuhlman or Aimee Simple McPherson prayer and it simply isn’t there. I might be able to convince you if you were listening in but I would know it wasn’t there.

For the Psalmist David I think his place to get in the zone was out under the stars at night as he watched over his flock. For Daniel it was a special space in front of the window, maybe kneeling on his prayer rug. Moses found his zone in the back of the desert tending the flocks of his father-in-law and Joseph got his best prayers said probably from the bottom of the pit where his brothers threw him before selling him to the first travelling caravan that came by as they were trying to decide what to do with the Dreamer who was the bane of their existence. Samson really got in the zone as he was pulling a grinding wheel like a mule, his prayer helped him to deliver himself from his enemies by dying with them, not the way I would want to go! I’m sure it’s safe to say Jesus stayed in the zone with the Father but for sake of making a point let’s say he reach the pinnacle of his zone when he knelt by the rock in the Garden and prayed “Nevertheless not my will but Yours be done.” That had to take every bit of will and strength he had in the human part of himself, so much so that his stressed out body shed perspiration that had looked like great drops of blood, a phenomenon called Hematidrosis.

What causes you so much stress that you “sweat blood”, and when you do is there a place you can go either physically or mentally to get yourself in the zone or find the hot spot for you to communicate with God and find your relief, your answers? I’m not asking you because I am going to dazzle you with great words and fancy footsteps because I don’t have a pat answer. I only want you to think about it and if you don’t have that place to think about it until you can come up with one. My dad had a prayer rug that he would lay on or he would roll himself up in a blanket making a womb of silence as he talked to God. My grandfather would walk in the mountains and there was a cave where he would go and an angel would appear to him there. For me as long as I can get quiet and close my eyes I can pray and I can hear… I call it my place of quiet rest, near to the heart of God… isn’t there an old hymn that says exactly that? Cleland B McAfee wrote it in 1903, it says, “There is a place of quiet rest near to the heart of God, A place where sin cannot molest, near to the heart of God. Oh Jesus blest redeemer sent from the Throne of God hold us who wait before you near to the heart of God.”

My recommendation is this; find your very own Zone, Hot Spot, or Quiet Place. My thought is that you, as I found out today for myself,  will be connected while others around you are still trying to find their Wi-Fi signal!