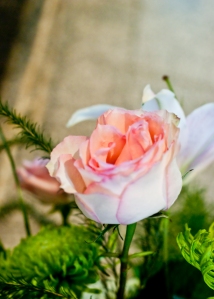 Picture it, a preacher crying out to people trying to warn them to change their ways. He was telling the crowd that was gathered around him “you have received the law by the direction of angels and have not kept it!” WOW, talk about being brave! In the face of an angry mob he continues to tell the truth. I wonder if I could be so brave? So when the crowd heard these words, they were “cut to the heart, and they gnashed at him with their teeth, (sounds like an earlier version of Mike Tyson in the Holyfield fight!). As Stephen was teaching them he saw the heavens open and the Son of Man standing at the right hand of God…they began to scream and yell and ran at him with “one accord;” and they cast him out of the city and stoned him.” Here is where we are coming into our point. Verse 58 of chapter 7 of Acts, “And the witnesses laid down their clothes at the feet of a young man named Saul.”

Go on and read into chapter 8 where it says that Saul was consenting to his (Stephen’s) death. Needless to say, Saul was a DEVOUT something…a law keeper, a Pharisee, the BEST of them all. He had studied for fourteen years at the feet of the best of teachers, Gamaliel. He knew the law to the last “jot and tittle”. This man’s main purpose in life was to persecute the people of “the Way”, to drag them out of their homes, men, women and children to be persecuted and even put to death. Does that sound like anything that is happening today?

Now picture another scene, it’s a dusty road near Damascus, this same man, but something very different transpired. As he traveled he saw a bright light, he was overcome with fear and fell to the ground, then he heard a voice saying to him “Saul, Saul, why are you persecuting me?” At this point he recognized a power that he had never known and this angry, self righteous, murderous man was changed, dramatically, forever changed. The people were so afraid of him, they couldn’t believe that he had changed they thought it was a trick to trap them! With his spiritual change he also had a name change…from Saul to Paul.

There was also an anointed Saul in 1 Samuel 9:15-17 The prophet Samuel had been instructed by God to anoint a new King, when the prophet Samuel laid eyes on Saul God spoke to him and said, “He’s the one, the man I told you about. This is the one who will keep my people in check.” He was anointed as King.

Acts 9:15 But the Master said, “Don’t argue. Go! I have picked him as my personal representative to non-Jews and kings and Jews. And now I’m about to show him what he’s in for—the hard suffering that goes with this job.” This Saul got a name change! People were afraid to trust “Paul” because images of his former personality “Saul” were still very vivid in their mind; he had to prove himself to them!

So what’s with YOU? You’ve been so bad that you can’t change? So evil or wretched that God cannot change you? God can change Saul, the murderous Pharisee, to Paul, the greatest teacher we will ever know, aside from Jesus.

What do YOU need changed? Whatever it is, give it all to the Lord Jesus and let Him change YOUR name and make you into a brand new creation! This is not just for “sinners” but for those of us experiencing things happening every day that we feel we just cannot over come!

See the light and say, “Here I am Lord, and I am listening!”