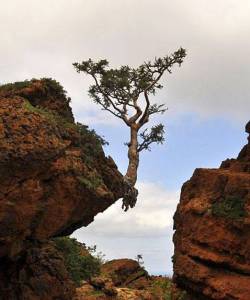 When I posted the picture you see to the left of this article, the photographer called it “Tenacity”, I thought about how hard it must have been for that little tree to hold on in what seems like very shallow soil. It must have faced high winds and extreme temperatures yet it seems to be thriving. I likened it to those of us who are trying to hold on even though it seems like it is against all odds. It made me think of what my grandfather would always say if I went to him with a problem, he would kind of turn his head to one side and grin, “dear, just keep on keeping on” and everything will be alright.

We used to sing a song that said “You’ve got to keep on holding on, keep on holding on, the devil may try to turn you around but keep on holding on!” The song then goes on to tell of the righteous man Daniel who continued to “keep on holding on” by praying three times a day after the King signed the order stating that no one should pray or ask a request of any god or mortal except the King. If anyone dare disobey they would be thrown in to the lions den!

Daniel 6:10 “When Daniel learned that the decree had been signed and posted, he continued to pray just as he had always done. His house had windows in the upstairs that opened toward Jerusalem. Three times a day he knelt there in prayer, thanking and praising his God.” We all know the story, he was thrown into the lions den to be torn apart and eaten, but God sent an angel that held their mouths shut for the whole night while Daniel “kept on holding on”.

Then we sang about Jonah being down in the belly of the “whale” when he began to pray. Think about being inside that fish for three days, stomach acid eating away at his flesh and yet he “kept on” praying and was finally delivered!

What about Paul and Silas in the jail? They were waiting being whipped or put to death but instead of being afraid they started to sing “Psalms and hymns and spiritual songs” and suddenly there was a great earthquake that shook the jail and freed them from their chains! The soldier that was guarding them was stunned, he turned to them and asked what he must do to be saved, the answer came in Acts 16:31 “Put your entire trust in the Master Jesus. Then you’ll live as you were meant to live—and everyone in your house included!” I would think it was hard to “keep on keeping on” when your wrists and ankles in chains, wouldn’t you?

When we are born we start a learning process from the moment we open our eyes, vision blurred by whatever that stuff is they put in them at birth! When mine were born the first thing they did, even before the umbilical cord was cut, was to nurse. We learn to distinguish faces, numbers, letters, colors, and we learn right from wrong, quickly. We get an education and join the work force.

All the things we do in life make up a detailed Pageant, the story of our life. When it comes time to lay me down to sleep, the final curtain falls and what we have done stands in eternity as a witness for, or against, us.

I have heard people say “I want to make my own mistakes” and to that I say rubbish! If I can learn from someone else I want to do it so I might do more with less regret. I want to give back to those who have helped me and I want to pay it forward by helping someone else.

I remember one night as I tucked in my dad for sleep, he looked up so pitifully and said, “dear, thank you for all you do, you are our angel.” I wanted to cry, instead I said, “Oh daddy, did I ever say thank you when you changed my diaper or fed me? You don’t owe me any thanks.” My heart tugged because he wanted to lie beside his sweetheart, of 70 years, and hold her hand while he slept but can’t reach her from the recliner in which he had to rest.

At the end of my life will there be people who will care enough to stand by me?

Have I done my best to learn and teach?

Will I be able to stand before the Great White Throne on Judgment Day knowing my name will be found in the Book of Life?

Will I hear Him say, Matthew 25:23  ‘Well done, good and faithful servant; you have been faithful over a few things, I will make you ruler over many things. Enter into the joy of your lord.’?

If I can persevere, if I can just “keep on keeping on” so that I can “keep on holding on” I know I will never be as courageous as Daniel, Jonah or Paul and Silas but I will know I have done my best, thanks Pop!

I don’t know who to give the credit for the photograph “Tenacity” but it is certainly  beautiful!